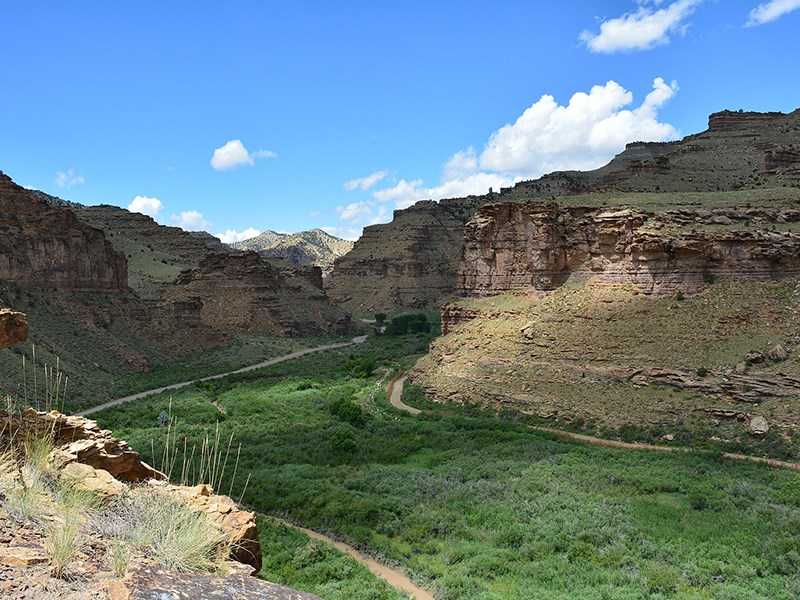 Deep in the Utah desert, about 125 miles from Salt Lake City, you will find the Nine Mile Canyon filled with tens of thousands of petroglyphs and pictographs, some over a thousand years old.

The earliest images have been traced to the ancient native peoples known as the Fremont. The Fremont culture received its name from the Fremont River in the U.S. state of Utah, where the culture's sites were discovered.

The canyon located in the counties of Carbon and Duchesne in eastern Utah and runs for 40 miles, so it’s not exactly clear why it’s called Nine Mile Canyon. One theory is that the explorer and surveyor John Wesley Powell may have used a nine-mile transect (a method used by cartographers) to map the area. According to another theory, the name is associated with the length of the unpaved road, which existed on the territory of the canyon in the 19th century. However, that’s just a guess by the Bureau of Land Management, who oversees the site.

It’s been called “the world’s longest art gallery”, with extensive and intricate images-petroglyphs from the Fremont era (generally about 400 CE to about 1400 CE), but also from later Native Americans (mostly Ute) and western settlers and explorers during the 19th century. Many of the images depict hunting scenes and animal life (bison, lizards, birds), but some defy easy identification. So of course it’s been proposed that some of these, say, less-decipherable images depict so called “ancient astronauts”. The most known are two clusters the Great Hunt Panel and Newspaper Rock State Historic Monument. 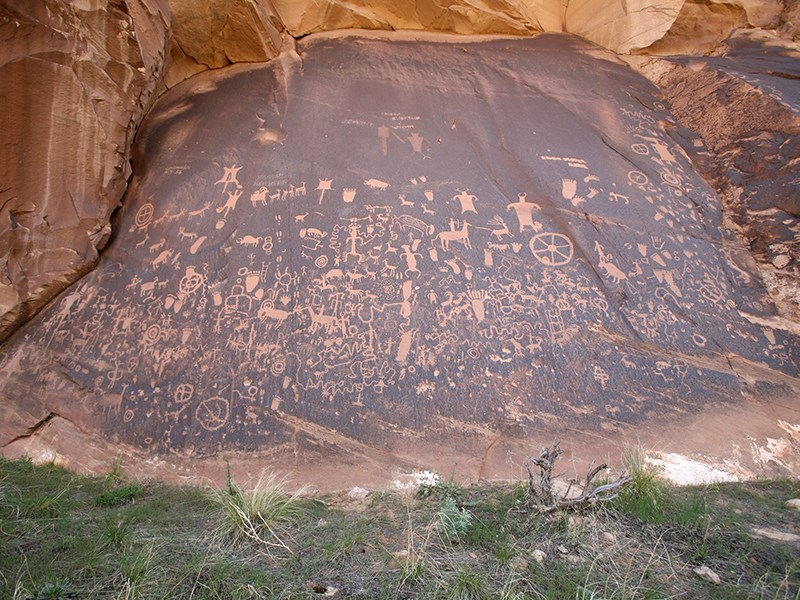 There are at least an estimated 1,000 rock art sites in the canyon, with more than 10,000 individual images. The true figures may be ten times as high, but there is no question that rock art is more concentrated here than anywhere else in North America. Much is in the form of pecked petroglyphs, and there are many painted pictographs as well.

Researchers have also identified hundreds of pit-houses, rock shelters, and granaries, although only a limited amount of excavation has been carried out. Many of these structures are located high above the canyon floor on cliff ledges, pinnacles, and mesas. They were built by the Fremont, whose presence in Nine Mile has been dated at AD 950-1250. Indeed, Nine Mile Canyon was one of the locations most heavily occupied by the Fremont. In contrast to the purely hunter-gatherer cultures that surrounded them, the Fremont practiced agriculture, growing corn and squash along the canyon bottom. Compared to other Fremont areas, relatively little pottery is found in Nine Mile, suggesting that beans, which must be boiled for hours to become edible, were not an important part of the local diet. The Fremont left irrigation ditches and earthen lodges on the canyon floor that could be seen as late as the 1930s, but they are no longer visible after generations of modern cultivation. 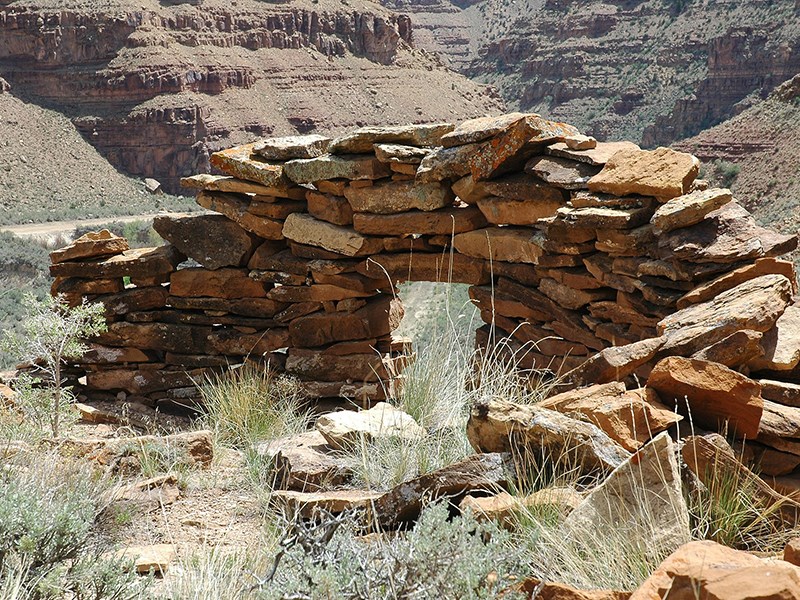 By the 16 th century the ancestral Utes were in the canyon. They added to the rock art already on the walls, but in styles of their own. Many scenes, for example, depict Ute hunters on horsebacks and date to the 1800s. Despite the number of Ute artifacts found in Nine Mile, there is no archaeological evidence of any Ute camps or residences.

About halfway through the Canyon are the remains of an old town called Harper, once a stagecoach stop and now a ghost town. The canyon became a main transport corridor in the region during the 1880s. Since the transport link switched to more convenient roads in the 1910s, people left canyon, and until recently only tourists visited it. The area and images of Nine Mile Canyon are protected under the Antiquities Act, although they are threatened by both natural and man-made erosion.

The discovery of rich deposits of natural gas deep beneath the Tavaputs Plateau has brought an influx of industrial truck traffic since 2002. The large amounts of fugitive dust produced by the trucks' passage may be damaging the rock art. Public debate is ongoing about how best to balance energy development in the canyon against the preservation of its cultural resources. Another threat is vandalism, and one of its forms is the “Private Property” sign placement directly on ancient images. 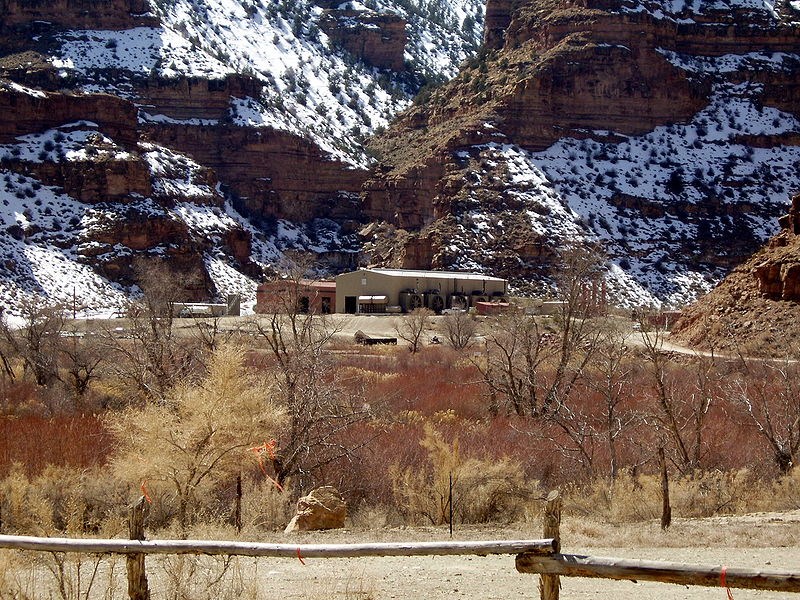 Know Before You Go

From Wellington, Utah - take Route 6/191 east about 7.5 miles to the turn-off for Soldier Creek Road going northeast – it becomes Nine Mile Canyon Road. You can travel the length of the Canyon (about 40 miles) by car, and the full trip is 78 miles. Since there are no amenities or gas stations along the way be sure to gas up first and bring plenty of water and snacks.

Watch out for rattlesnakes and stray cattle! Some rules and advice: “leave only footprints and take only photographs”. You must bring back out anything you bring into the Canyon. If you find arrowheads or pottery, don't take it - it's against the law. Be aware that some of the land in the area is private property.

Going to visit Nine Mile Canyon? Make sure to download our offline map of the world’s longest art gallery.

To use the map you need to download the mobile application CarryMap.